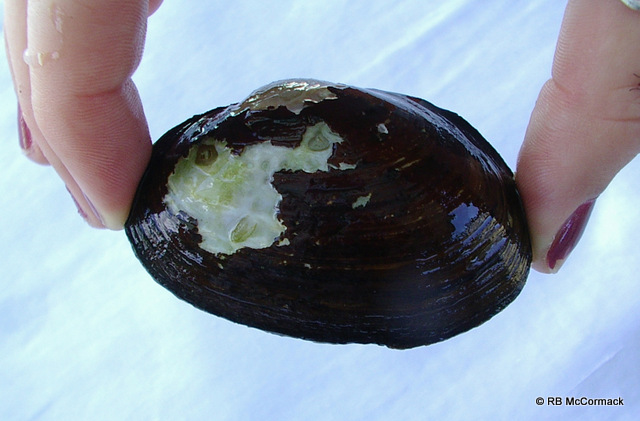 Freshwater mussels are native Australian animals and there are well over 40 different species of freshwater mussels that occur in creeks and rivers of eastern Australia. The majority are classed as river mussels, these need permanent and flowing water to breed and survive so generally found in flowing streams. It’s not straight forward as a river can have 2, 3, 4 or more species of mussels in it. Some species in the still water, some species in the faster flowing and some species altogether in amongst each other. For an article on freshwater mussels in eastern NSW, see,  Freshwater Mussels eastern NSW 2017-2018. To help identify what mussels you have in your local stream the NSW Office of Environment & Heritage offers a guide, see:   http://www.environment.nsw.gov.au/animals/musselid.htm

Many people want freshwater mussels for their fish ponds or farm dams to help keep them clean. River mussels are not suitable as they don’t breed and will eventually die in a static water dam or pond. However, there is one species that thrives in static water dams and ponds. That’s the floodplain mussel Velesunio ambiguus. The Floodplain Mussel is a native of Queensland, New South Wales, South Australia and Victoria and a very tough, hardy species that thrives in still static water. This mussel will live and naturally breed to huge numbers in your ponds and keep your water clean.

Freshwater mussels have important roles to play in pond or dam health, helping to keep a good standard of water quality. They feed by sucking water in through their ‘inhalant siphon’ and filtering out microscopic plankton, algae, bacteria and plant debris through their gills, then release cleaned, fresh water through their ‘exhalent siphon.’ They are natural biofilters processing large volumes of water (approx. 30-50L/mussel/day), removing large quantities of nutrients, and helping purify your water. If you don’t like the green colour from algae in you goldfish or koi pond or want your farm dams clean and clear to irrigate or swim in, then these are the mussels you need.

Freshwater mussels are native Australian animals and designed to survive the harsh Australian outback conditions of flood and drought. These are a robust species that can survive for weeks or even months without food. However, no food, no growth and the mussel will get weaker and weaker until it finally starves to death.

Freshwater mussels are either male or female. Unfortunately, I am unaware of any way you can easily sex them, as mussel shells are not sexually dimorphic. The species can breed year round, however, peak release time is in spring and summer and influenced by rain events, etc. The male mussels release sperm into the water column, which is sucked in through the inhalant siphon of surrounding females. Ideally, you need numbers of mussels close together for best results.

Females fertilised their eggs in the water tubes of the gills. Females brood eggs in specialized sections of the inner gills, called marsupia, where they develop into bivalved larvae called glochidia. The larvae bear a pair of hooks on the apex of each shell valve. The glochidia are released into the water, they are parasitic and must attach to the gills or fins of a fish to complete their development if they don’t find a host with a 24 hour period then they will perish so its best to have fish in the pond or dam with them.

Female mussels produce thousands of glochidia but few find a fish host and even fewer survive on the host. After spending a period of weeks to months attached to the gills or fins of a suitable host, the juvenile mussel drops to the bed of the stream where it spends the first few years of its life buried beneath the sediments and growing rapidly. Although the mussel larvae are parasites, they are only minor with even heavily infested hosts show little adverse effects.

Freshwater mussels are relatively long lived, they can live from about 10 to 40 years. Floodplain mussels can grow to 100 mm across the shell, however the most common size is 60-70 mm and this is the size we sell.

Typical farm dams have water levels that fluctuate up and down. That’s no problem for these mussels as they can be very mobile. They have a large foot that they extend out of the shell and use this to dig themselves into or out of the bottom sediments or push themselves into deeper water as the dam dries.

We sell mussels to people to help keep their pond and dam water clean, however, you can eat these mussels; they have been traditional aboriginal tribal food for 40,000 years, and large middens of discarded shells are common.  Although edible, they are generally considered poor food. We fry them on the barby with lots of garlic and onion and they are only just edible in my opinion.

2022. We only sell bulk loads of 50/customer. Sorry, due to very high demand we are attempting to service as many customers as possible this year. Delivery on the east coast of Australia is to your door via Star Track Express. For information on packaging, transport and receipt, check out our blog article.

If you want just a mussel or two for an aquarium, contact your local pet shop.